No-one of us is Human 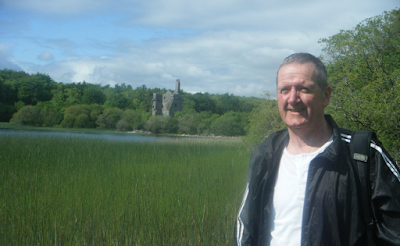 This is yours truly with the 'Old Keep' of the Catalysis Trilogy in the background, though on a warmer day.

(Take the link to my site for details)


Catalysis is a project that will ask you to engage in just a little less introspection than it demanded of me to produce it.

Please bear with me for just a moment while I remind you that I also made the claim in a previous cover that 'Revelation Still Rains' and to prove the truth of that one also, I invite you to repudiate my claim that no-one of us is human, even though that apparently illogical statement questions the validity of the term 'Human Being'. Catalysis is a work that takes an alternate view of our humanity and also our more than occasional lack of it, so it's not implausible that I had this minor revelation while working on that.

The fact is, our most fundamental viewpoints don't come down to our religion, our spirituality or our ethnicity. Our most basic perceptions before all of that later conditioning comes down to whether we are male, female or something in between. If Male and Female are our Alfa's and Omega's or our sometimes very polarising extremes of fundamental existence, then in between there is an ever increasing choice of letters to designate everything from gay to bi-sexual, curious or transgendered etc. The thing is, all of these MUST be equally valid. I say that because none of us is 100% what we physically appear, or claim to be.

The thing is, all 'human' babies are naturally equipped to be configured male or female for up to six weeks before they begin to diverge and maybe not all of them end up 100% one thing or the other. Let's face it. There are just as many guys who'd cry at sad movies as women who'd laugh at them crying. So despite what each of us appears to superficially be, there is not one of us who can look at any subject with the all encompassing scrutiny of all humanity, because we are simply incapable of all the implied variables. At a guess, I'd say each of us lacks maybe 40-60% of what it takes to have that 100% total human perspective.

We can only see our own, comparatively narrow and by deduction, blinkered viewpoints. We have to depend on our total opposites to appreciate the rest of it for us. It's only when we share what both of us can see, that we can really claim to have anything close to 100% of what is there to be seen.

The alarming thing is that although we are told that opposites attract, we seldom end up with total opposites. We prefer terms like soul mate, which suggests that we want to be with people who possess at least some of our own intrinsic values. However, for the sake of this argument let's just say that every couple has something close to the complete human outlook. Then again, we also know that none of us is perfect. Whether we like to admit it or not - we are all flawed.

So when we talk about our humanity or our lack of it, what we really mean is our ability or inability to empathise with each other and also with those less intelligent species that sometimes depend on us to do the right thing for them, because they're not quite up to it. However, because we are inadequate, we are just as likely to simply walk past someone or something that needs us, unless our opposite number just happens to be there and compels us to acknowledge their presence.

Then again, maybe that's how we get to meet those opposite numbers, alter egos or whatever they are.

That poses a further question.  If we have to pause and give our complementary alter egos the opportunity to catch up to us, so we get teh full perspective, is it possible that Destiny and what we call Humanity have something in common?

I wrote that but I also have to think about it sometimes.

Posted by Denis McClean at 14:06 No comments: