It's Spring - Ochre is coming 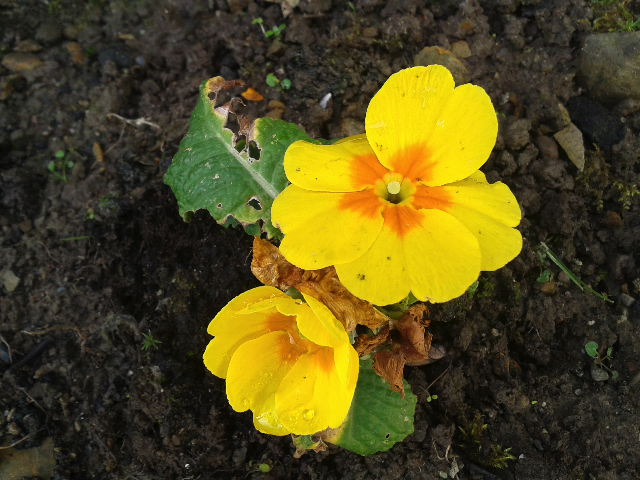 It's Spring, and to celebrate, this is a picture of a Spring Primrose that I took in my garden yesterday. You might see the leaves barely survived the recent spate of hard frosts. There are also the shriveled  corpses of two previous buds that flowered, blossomed and then died since it first introduced itself unexpectedly last Christmas Eve. I still can't believe that this little plant not only arrived three months early, but is still growing strongly before any of its kind are to be be seen anywhere else.

Ochre, which is book two of the Catalysis trilogy is not so early, but it is also growing extremely well and I can guarantee no-one will be disappointed. The Ochre Worlds were just three abstract words that I chose to describe a place I didn't yet need to visualize while I wrote Catalysis - Book 1 - Changes Imposed. When it came to putting pen on paper and write Ochre, I faced the daunting task of making them real enough to be believable by you.

To remain true to my goals, those worlds can't be illogical creations of pure fantasy. They have to satisfy science, logic, time and astrophysics, especially considering where and when I placed them. I don't like to blow my own trumpet, but the results so far have blown me away. Playing the part of 'Creator of Worlds' from their earliest inception is a 'God Like' virtual experience. You'll know more precisely what that means in a few months, when I let you have it.

My return to the comparative grind of adding words adequate to populate my/our creation is, I am guessing, close to 'cold turkey' drug rehabilitation. Anyway, aside from letting you in on the progress I'm making with Ochre, I thought I should share something that struck me while I was God, and it's this. Only when you have to assemble worlds from nothing, and produce a guarantee that they work, can you begin to appreciate the pre-existence of the raw materials needed for their assembly. That is the star stuff needed to make absolutely everything, including you and I and everything we will ever physically touch. This is the world that we live on. In turn, this makes possible the predictable physics that go some way towards making our universe measurable and explainable in words.

I believe I can write, but I also believe no words exist to describe the earlier process of producing the 'Stuff' that makes star stuff, so that they in turn can make you, me and all of physicality.

This blog also comes with an apology. The previous blogs from my website can still be seen on my Facebook page, but the problem with keeping the old website blog, was that it's limited in the way we stay in touch and I want to to know what you think. This BlogSpot let's us talk.

Thanks for your patience.