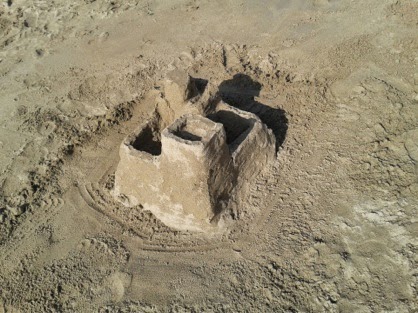 It seems quite a while since my favourite people and I were able to get down and dirty at Lahinch beach in West Clare. We built sand castles while the bravest of us really swam, not like the many posers with surf boards and wet suits. Then we played Goodminton or Catch. Oh, Goodminton is like Badminton except it's played with no nets and with any kind of hand held bat with a squash ball, or whatever you happened to bring or find.

Anyway, considerable thought went into all three sand castles, not all of which ended up, or even started looking like castles. As I recall there was a recreation of a scene form Mordor of Lord of the Rings fame, together with an ‘Assembled Host’. The other was a curious creation from a Japanese Science Fiction Anime with teeth for walls, or so I was told.

The one above was all I had to offer in the time available because I spent more time that I should on supporting the far corner. Let’s just say my architectural skills were found wanting. It refused to accept the diktats of my imagination. I wanted two higher layers for defenders who could be protected by small walls similar to that in the near and lower corner, but it kept collapsing. Wet sand dries very quickly under the sun and its ability to support weight incorporates that fact in the equation. In the end, I just patted it down and played ball instead. I also forgot to put in a door, but you noticed that straight away - right? Sure you did?

From a distance, as I went to retrieve the ball, a small boy was about to pass by but stopped. He was caught for some moments between the possibility of playing an angry God and utterly destroying my castle for the affront of being on his beach, or allowing his own fertile imagination to create residents, invaders or defenders and play out a major or minor drama of his own. He looked around to re assure himself that he did indeed enjoy a Godly dominion with no lesser gods to contend with, and then returned his gaze to ‘His’ prize.

As his father disappeared down the beach with his younger sister in tow, the boy’s mannerisms betrayed the depth of the plot he’d very quickly succumbed to. All I can share with any certainty was that there was an exchange of archery and insults. The latter was clear from his haughty expression as he mouthed them. There was also at least one horse with rider and possibly two fatalities. One died quite quickly from a projectile to the heart, while the other lingered near death for some time before proceeding into an under or over world. That much we’ll also never know.

The nameless boy then left, occasionally glancing over his shoulder possibly to ensure that the outcome he created remained final, until he was out of sight. Whatever happened after that was, very obviously, no longer his responsibility.
Thankfully, my third book is also taking shape and like my castle, I know with absolute certainty that it will take you so very far away from where you are now. That’s apparently something that good books and mediocre sand castles have in common.

Why not get ready by picking up a copy of Catalysis or Book of Plebs and get yourself into the ‘Zone’ while I get this one ready for you.
Posted by Denis McClean at 06:10