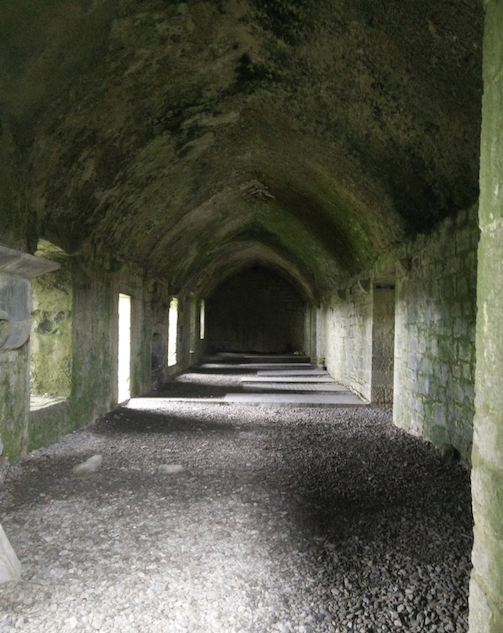 This Abbey, not far from where I live, was last used a long time ago. This is evidenced by the tombs of the Abbots who directed songs of praise from under the same arches where their monks prayed. These 6 visible tombs are only a fraction of the total number that also lie in other now also silent, private and closed cloisters. From where I was permitted to 'borrow' this image, even the involuntary act of living can feel like an intrusion into their world.

The ambiance easily summons a momentary illusion of a single file of monks draped in thick brown robes and singing Latin as they slowly make their way around the Abbey walls. The much revered dead still attend to their duty of adding impetus to the hopes and aspirations of others, by propelling them faster and therefore higher, so God can entertain them or not, at God's discretion.

Even though they lived in a very much darker age, these Abbots knew of the Godly Constellations, though not that their individual stars inhaled Hydrogen, breathed out Helium and burned nuclear fires in the process.

Now, so many years later in this enlightened age, most of us call that process Nuclear Fusion and haughtily look back over our shoulders on monks and their superstitious ignorance.

The monks knew nothing of what lies beyond each side of the physical membrane of this universe, nor of other species that even then were tapping into that mystery to close the vast distance and time between them, but they knew enough to call the constellations they traverse like gods, pagan. They then turned their pages to chant some more.

Lastly, there are those of us who are neither haughty, Abbots, Monks nor Star-Farers. We know that most stars of ancient constellations have worlds, and we know that some of those worlds are home to others who might think, hope, aspire and pray. They, like us would know that their worlds merely orbit around a sun, while the godly constellations twinkle gently at night, from so very far away.

There, they say, must also live the 'Priestly Castes' to serve those very distant gods from miraculous blue worlds specially provided from within themselves. Unlike the jealously remote, who may only admire from afar, those attendants are blessed by being so close they can actually touch the stuff of the Untouchable, Who would also feed and water them. Then, as a further reward for their life's devotions, they would become one with the God they served and lie in a holy place from where they may continue to sing their praises undisturbed.

THEY are just one of many people in  ...

Get up to date and read Catalysis, the prequel - http://www.denismcclean.com