Science Fiction is not just Literature at its Absolute Best 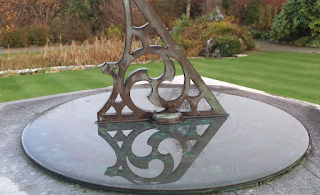 The following is typical of what you get if you 'Google' literature.

It is a noun, comprising written works, especially those considered 'superior' or of lasting artistic merit.

"a great work of literature"

The accumulated rain on this brass sundial hides the time of day unless you adjust your perception to appreciate the beautifully detailed instrument as well as the accuracy it can produce. Yet some people claim to look for only the best books by blinkering themselves to some truly exceptional books.

Believe it or not, there are those who do the equivalent of looking for literature under the letter 'L'. They have much in common with people who gather to taste wine because it's not vulgar like beer, even though it really is. I call them 'Long Noses' because beer tasting is just as much fun and you get to taste more without abusing your nose.

There are also literary 'Long Noses' who have conditioned themselves and many of us into believing that truly great literature can only be an autobiography or a novel based on fiction or history. But seriously, who would really want to read a book written by someone with such an inflated ego? So, for most real people, 'Literature' is effectively 'the' novel based on history or fiction and everything else must be either crass or boring.

Yet any novel based on history could be interesting, but it's already finished. Another based on fiction will never happen, simply because it is fiction. They are quite limited.

Like any other book, Science Fiction can be written any way from poorly to extremely well and in as many styles as any novel, but because it is a logical, if sometimes far fetched extension of today, it requires the writer to create a tomorrow in which it can be reasonably played out.  I would consider that to be far superior to re-describing yesterday, or presenting a version of tomorrow that is destined to be forever fiction, because by that definition it can never happen.

Science Fiction 'Literature' must be well written, but must also create a logical if sometimes incredible tomorrow that becomes more credible as the link to today is demonstrably maintained and even strengthened. It becomes even more acceptable when today is demonstrably derived from a previously distant and possibly undocumented past.

Catalysis is Book 1 of the Catalysis Trilogy and it describes today just as it is about to diverge into a very real or an alternate tomorrow. Who can say which, until tomorrow actually happens. After all, that's the way tomorrow has always historically happened.

Ochre is Book 2 of the Catalysis Trilogy and it describes a yesterday just before documented history, but then everything that happened only 5000 thousand years ago is largely undocumented. So who can say what did or did not happen back then, especially when today is the very demonstrable result.

Imago is the final book of the Trilogy and it will present you with a tomorrow unlike any you've ever dreamed of, but one that is based on yesterday and today, so it can never be discounted.

The Catalysis Trilogy is three separate worlds created from the simple fact of today. One retraces history while the other advances into the future. It is probably as far from the tired retelling of yesterdays as you can possibly get, and because it produces a viable tomorrow, it is every bit as 'Literature' as a Tale of two Cities. In fact, it has as many fabulous cities as it has viable worlds.

The real definition of 'Literature' is something to read anytime and any number of times and unlike a bottle of wine, it will always be full and never become bitter if left for a day or two. Enjoy 'The Catalysis Trilogy' sensibly because it is physically too big and conceptually too vast to be ingested as quickly as you will wish.