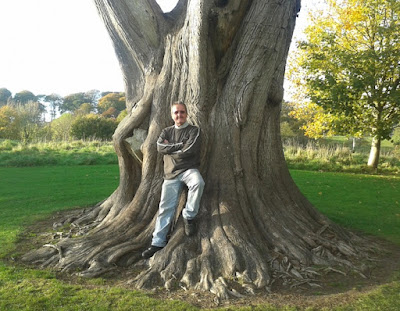 True to Celtic Tradition, I consider this tree to be venerable and warm, especially on the sunny side of it I chose for this photo.

There are no prizes for guessing that I was born after the tree, but our pose is evidence of Destiny in action, and not necessarily on any small scale. Great things lie ahead for both of us to celebrate.

Catalysis Book-1 (Changes Imposed) and Ochre, Book-2 of Catalysis make for some fascinating reading, but they're not a simple chronological progression to some 'Happy ever after' in Book-3.


I HAVE BEEN ASKED HOW DESTINY IS GOING TO BRING BOTH BOOKS TOGETHER.

She'll do it because Destiny is not some unstated, random and abstract non-entity that places any one of us under a benevolently solid friend like mine above, for absolutely no reason. It's not a random coincidence that either happens or not without consequences. To explain this clearly, I had to start by documenting the hierarchy of changes that Destiny can invoke at any time in order to irrevocably alter the world we would otherwise like to become accustomed to living in, thereby making evolution redundant. Destiny is not a mute witness to change but works alongside and even dictates to evolution. It is the process of Global and even Universal Catalysis that was always going to produce one very specific result, just like a very measured test in the science laboratory that was always going to have one well anticipated outcome.

Catalysis Book-1 (Changes Imposed) introduces us to an obviously inferior human being who turns out to be anything but inferior (No surprise here). When it becomes undeniable that she is not just unusual but more special than any human should ever expect to be, it's already too late because she was never alone. Destiny was always walking with her and holding her hand so she could oversee the final implosion of the global order and usher in the new age. We have a history of ignoring Prophets, so it should come as no surprise that those who should know better choose to ignore her. This proves to be an error of cataclysmic proportions and so many changes on the same scale then become unavoidable, which is the way Destiny works.

Ochre (Book-2 of Catalysis) is a place that is very distant in time and space from our here and now of increasingly futile todays. We arrive there on the first page and immediately begin to appreciate the timeless vast depths that Destiny routinely travels, as she does what she does. Under the mass of Ochre, a very divided civilisation faces its Nemesis. To the technologically advanced Yan, their perceived enemy is nothing but an unfortunate quirk of the cosmos that will arrive before they can develop the means to escape it. To the spiritual but also superstitious Bi-du, it is retribution from the Godly Constellations for the crimes of the Yan against their kind. All of them will perish, but the spiritually enlightened will be reborn into alternate worlds of their own making (There is a vaguely familiar ring to that).

To the supposedly altruistic Spoke, who are merely passing by, engaged on their own mission of redemption, there are so many reasons to turn a blind eye to the impending apocalypse. Meanwhile, the autonomous artificial intelligences who command the Spoke starship remain apparently oblivious to Destiny's plan as it unfolds. Only their cyborg Prophet, who serves as a trusted intermediary of sorts, between the biological Spoke and their synthetic AI's, seems to be aware of being called to possibly witness some higher purpose in an impending and otherwise meaningless extinction event amongst the stars.

Hope is a synthetic avatar entrusted with command of the Spoke starship as it traverses the ages. She is appointed by Destiny to join some seemingly tenuous dots in the Godly Constellations to make the ludicrous and laughable Bi-du aspirations a possibility while opening up some, even more, mind-blowing possibilities concerning us.

It wouldn't be unusual for you to question how something as apparently abstract and innocuous as Destiny could possibly bring two such seemingly diverse books together in the third book. So, here's a concept that might help you get your head around Destiny's size and potential influence. By inference, you can then see how our fantastic past has always created our mundane present, which will contribute to the creation of futures that could be considered magic to us today.

Science has proven that everything we will ever see, touch or interact with on any level, came with the Big Bang and also that the original constituents of the same phenomenon were initially and totally confined within a very small space. That means that every part of what the universe has now become was once within a literal arms reach. Therefore, every part of this expanded reality still remains as much an integral part of it as the soil in your back garden and the bugs that live in it.

How can we be remote strangers to something that we were born with, and remain gravitationally attracted to for 14 billion years? Destiny just decided to put that bit there and our bit here. But for all we know, it could just as easily be the other way round.
Posted by Denis McClean at 11:00