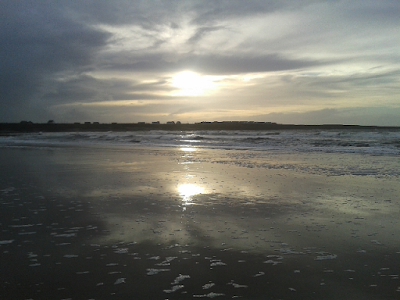 Why does the sea seem to call out to us, even in winter when it's almost cold enough to kill us?

We joke of course, but evolution is never so flippant. It whispers in our ears that it very recently knew us as simple tetrapods that walked clumsily out of the waves and into the forests for more food diversity.

Our delusions of perfection tell us to deny that we were anything less than what we are today, but we confess our sin by our presence on the shore, always looking out.


This Mid-Winter 2015/16 Solstice Sun, reflected on frigid sand and sea seems to double its apparent elevation to give us false Hope of better things ahead. Longer days of warmth and life will mean happy smiles and a spring/summer of plenty, but for that to happen we must still depend on the further rotation of our tilted planet within the cosmos.

The virtual e-Book pages of OCHRE reveal a far more potent aspect to Hope. Between its covers she is also the artificially intelligent and autonomously sentient avatar of a Spoke star ship, engaged on a mission of redemption to save an alien but parallel version of humanity from itself.

Hope has a number of problems that sometimes threaten to divert her from her duty. One of these is that she was compelled to stop at Ochre because a 'Prophet' designed a contingency sub-routine for her program which dictated that she must. This, despite a simple mathematical intuition that advised her to quietly pass it by. Though she doesn't yet fully appreciate the implications, she is also in love with the delusion of the Prophet's infallibility. These considerations are not fully explored in OCHRE because all of its characters are somewhat preoccupied with an impending apocalypse.

OCHRE is Book 2 of Catalysis and is now available on Amazon and Smashwords. It will very soon be retailed by Barnes & Noble, Apple, Kobo, Sony and all reputable and sensible outlets.

With this second book, all readers of the Catalysis trilogy will begin to see where it was always destined to go. Only Destiny is empowered to make all futures everywhere happen or not. To Her, the unbelievable and the impossible are simply what She does while She also transcends time and space. When you've read it, you might also understand why She seems so willing to grant us Her ear. 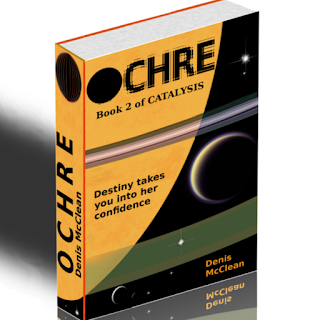 Ochre is now as real as Hope and available with a click, from Amazon, Smashwords, Barnes & Noble, Kobo, Apple and many more.